Letter of attorney of John Borell of Writtle, Essex, c. 1520 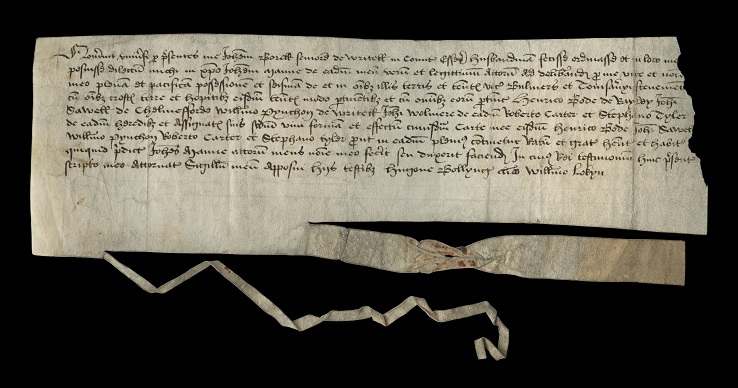 Letter by John Borell of Writtle, Essex, appointing John Manne as his attorney to deliver seisin of lands called Bulmers and Tom Saveryn's tenement to Henry Bode and others [c. 1520].

A related grant dated 6 November 1520, apparently concerning the same property, by Henry Bode and the others named below to John Borell of Writtle and Joan, his wife, is held by Essex Record Office [D/DVm/16; see online abstract].

Translation:
Know all men by these presents that I John Borell' the elder of Writell' in the County of Essex, husbandman, have made, ordained and put in my place my beloved in Christ John Manne of the same my true and lawful attorney for the delivery for me in my place and name of full and peaceful possession and seisin of and in all those lands and tenements called Bulmers and Tomsau[er]ynstenement, with all crofts of land and [?]lodgings to the same tenements now pertaining and with all their appurtenances, to Henry Bode of Rayley, John Sawell' of Chelmesforde, William Pynchon of Writell', John Wolmere of the same, Robert Carter and Stephen Tyler of the same, their heirs and assigns, according to the force, form and effect of a certain charter of mine to the same Henry Bode, John Sawell', William Pynchon, Robert Carter and Stephen Tyler as in the same is fully contained, holding and in the future to hold authoritative and acceptable whatever the aforesaid John [M?]anne my attorney in my name shall do or cause to be done. In testimony of which to this my present letter of attorney I have affixed my seal, these being witnesses, Hugh Bollyng, clerk, William Lokyn.

[The photograph above was kindly provided by James Poynor.]